In the last series, we discussed whether graphics card mining will still have a place in the era of GPU mining after the Ethereum PoS merge, and whether ZK mining brought by the use of Zero Knowledge Proof will replace the previous graphics card Ethash mining market (Post link here) . It was mentioned last time that although the large-scale application of ZK mining around the world may only usher in the outbreak of ZK mining after zk-rollup replaces the centralized prover mechanism on Ethereum. However, under the current timeline, some pioneering projects have already adopted the zero-knowledge proof mechanism and successfully applied it to their projects, providing a guarantee for creating a private, scalable, and efficient L1 platform in the web3 world.

Aleo is an L1 public chain based on the developer platform, designed to build fully private and scalable web3 on-chain applications. ALEO was founded in 2019 and raised $28 million in its first round of financing, led by A16Z (Andreesen Horowitz). On February 7, 2022, Aleo secured a second round of $200 million led by SoftBank and Koracap, which become the largest Series B round in zero-knowledge proofs(ZKP) to date.

Internet services are ubiquitous today, and we may be accustomed to sacrificing personal data information when obtaining free web services. These information even controls the details of everyone's life. This may sound sad, but this model is currently does not have too much choices for us. The emergence of Aleo redefines the standard of internet interaction, using ZKP's innovative approach to safeguard the security, privacy, and ownership of user data. The advanced technology of zero-knowledge cryptography used by Aleo allows developers to create decentralized applications that provide users with personalized Web3 services without sacrificing control over their personal data and eliminating the risk of service providers losing Customer Information. Aleo has created a base layer that will ensure the scalability, reliability, and security of Web3 in the future, enabling it to be used for a wide variety of applications such as gaming, financial transactions, and social media.

Since ZKP technology is largely adopted by Aleo, so the mining algorithm used is roughly as shown in the figure below, for more detailed information please refer to the official website. 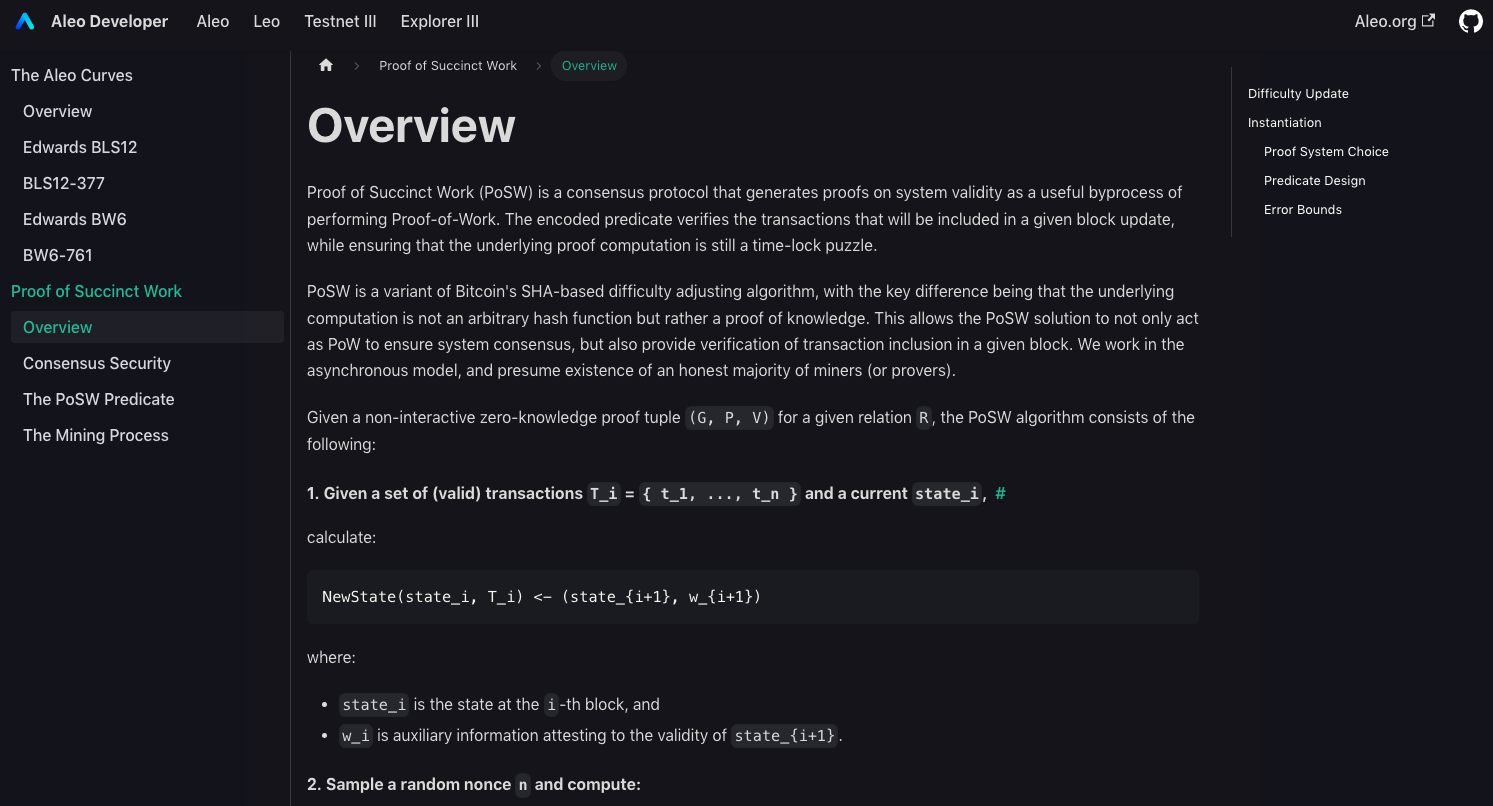 As of February 2022, Aleo has run two rounds of the testnets to give feedback and evaluate its performance and bug fixing. 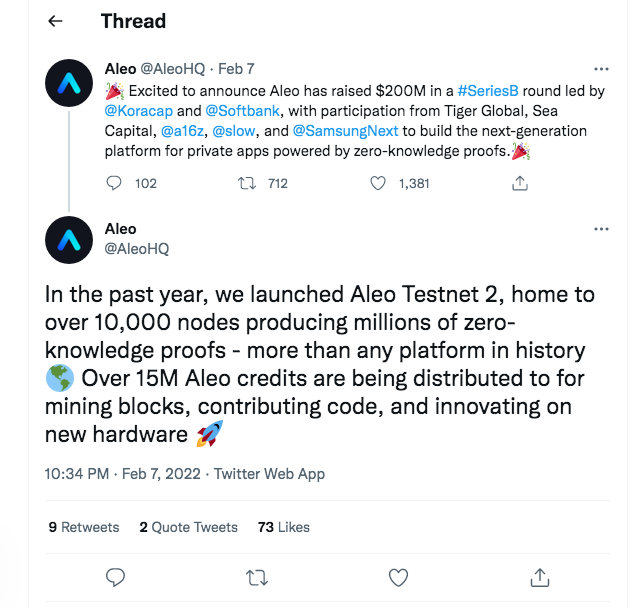 For the participants in the first two rounds, points corresponding to the testnet rules will be issued to the participant, and these points will be used as some certain entry level in the next round of testing. For details, please refer to the official website documentation. 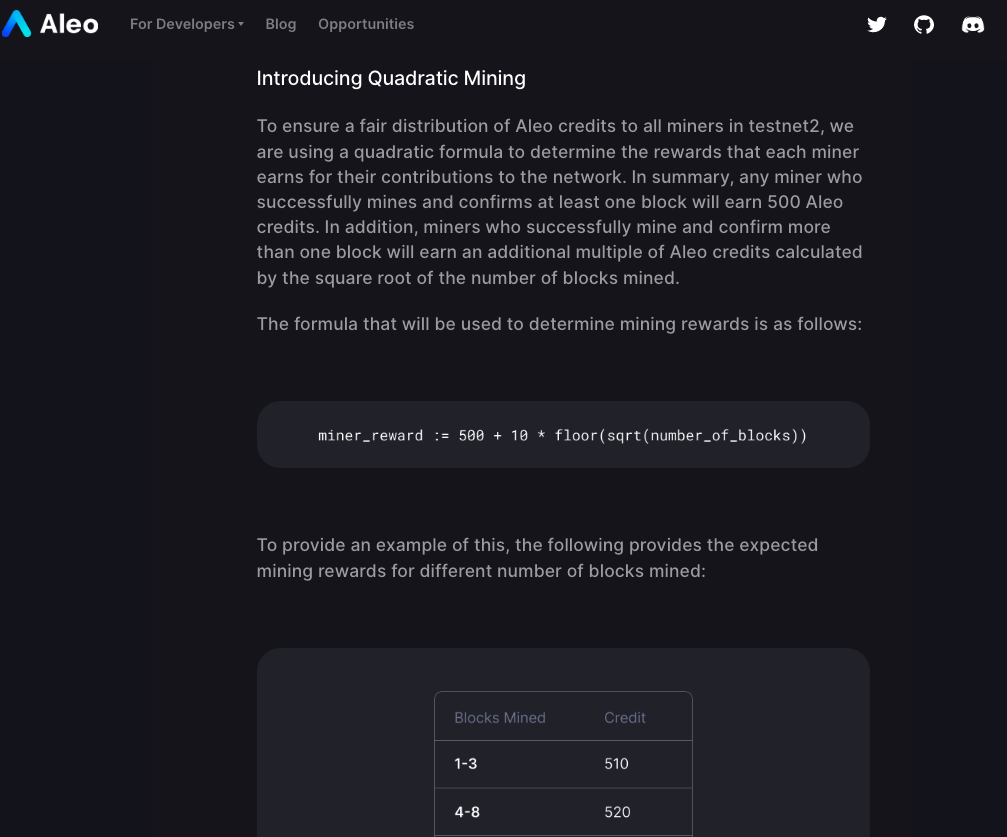 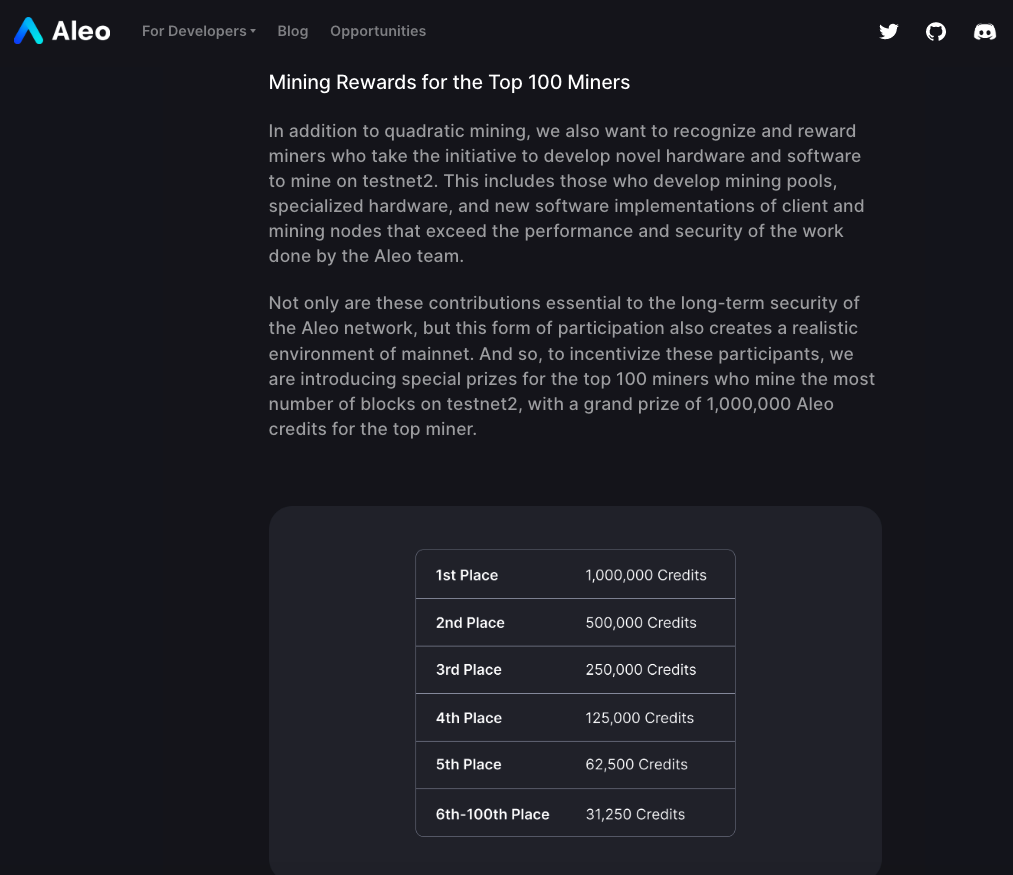 At the same time, the third round of stimulus testing of the testnet3 is currently underway. For details, please click here 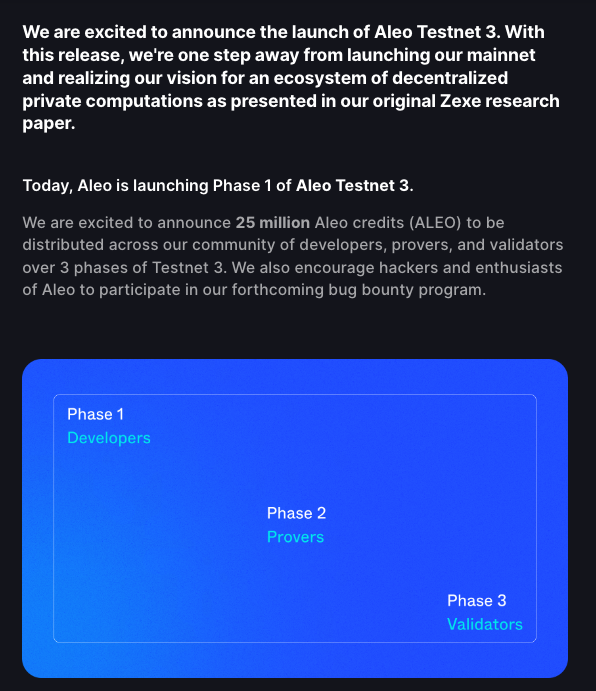 The specific timing of testnet3 is as follows

Aleo Testnet 3 will be released across three (3) phases to our community. The following is a summary of the highlights for each phase.

Phase 2 - Provers (September 2022)
Phase 3 - Validators (October 2022)
Note that the network will be reset periodically as needed during Aleo Testnet 3, based on findings from the bug bounties program.

Since some stages of Testnet3 require nodes that have obtained a certain amount of points in the previous test chain to participate. Based on some market information, Aleo’s previous testnet credits trading has been circulated in some small exchanges. (Disclaimer: the event above here in this article is only for the release of relevant information in the industry, Minernav does not take any responsibility for the losses caused by this exchange. please evaluate the risks by yourself.) 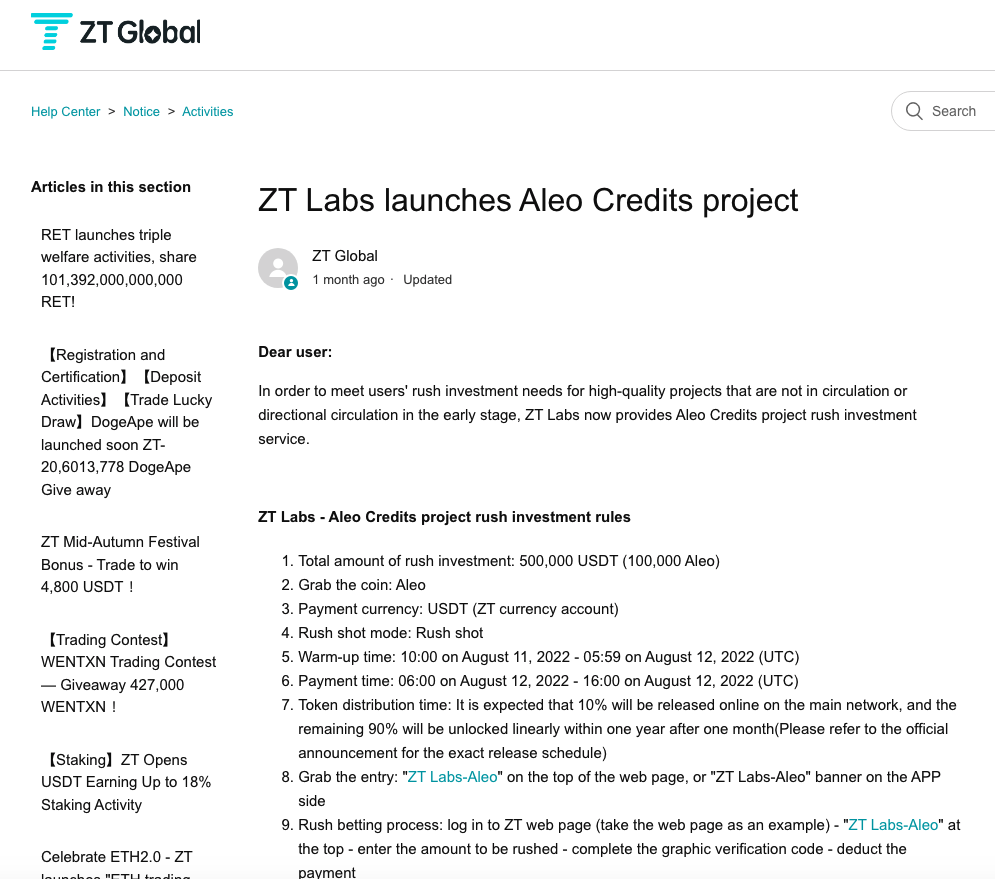 At the same time, Minernav observed that there are already some ZK Mining-related mining pools in the market, such as the early ZK mining platform ZK.WORK that supports both CPU and GPU. They optimized the execution hardware in the benchmark test from the software level to make it bigger Improve the mining efficiency to a certain extent, especially through the optimization of the ZK-Snarks algorithm to ensure that the computing resources run at full load during zero idle time. There are also optimizations for ZK calculations, including performance optimizations for the main time-consuming FFT/Multiexp modules, making them run more efficiently than the official version.

AleoX is another mining pool platform focusing on Aleo ZK mining. For details, please refer to the Aleox official website. 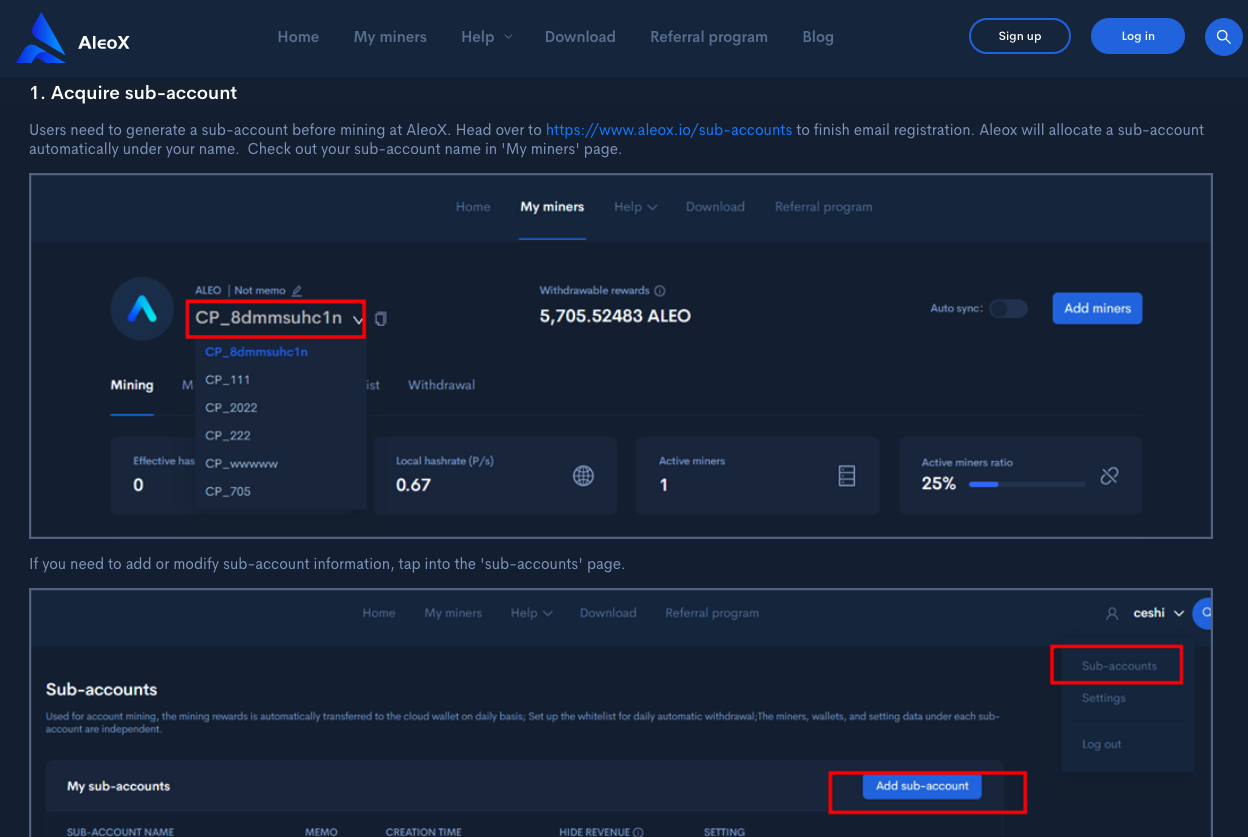 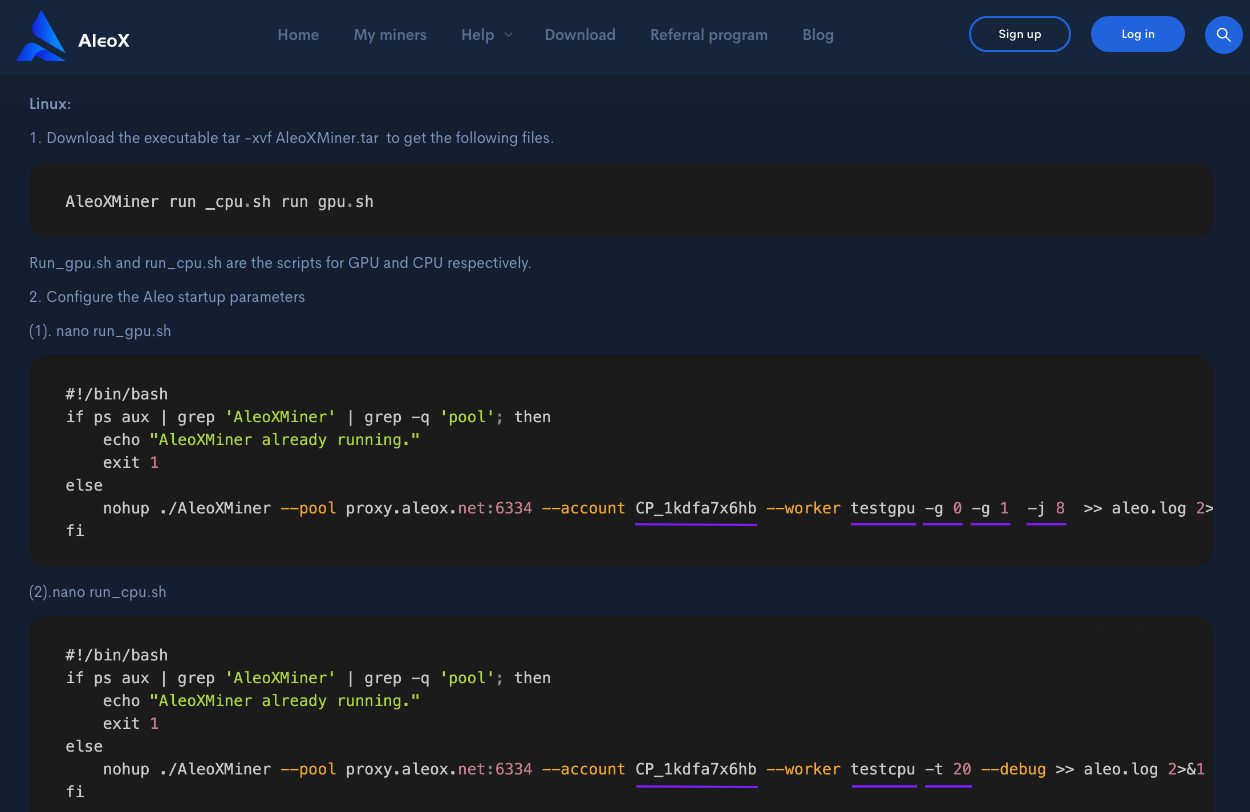 Finally, what is the specific miner look like for ZK mining specifically, ALEO mining, or what is the most dependent component of this algorithm, is it a graphics card or a CPU? First, since the network testing phase of the project has not been completely finished, there is no way to find out what the optimal configuration of the mining machine is. However, based on the feedback from some community friends, due to the particularity of the Aleo algorithm, the old ETH miner with only GPU computing power equipped may not be able to perform ZK mining work right away. Most likely, it will be more inclined to the multi-GPU server form as shown in the figure below. Since Aleo's ZK mining also relies heavily on CPU performance, the configuration setting specifically depends on the final algorithm from the project, but it is basically certain that GPU is still an important part of ZK mining.

Besides Aleo mining, another project that has also adopted ZKP is IRONFISH. IRONFISH's project vision is also similar to creating a web3 privacy platform, building a new L1 blockchain, using zero-knowledge proofs, using completely private transactions, and providing a privacy layer for all WEB3 common projects, similar to the current SSL on the web. At the same time, there is a key viewing configuration with built-in compliance, which can provide the function of financial institution auditing while maintaining privacy.

At present, IRONFISH is still in the testnet stag which is Similar to Aleo, participating in the testnet operation will earn credits. For the specific node configuration, please refer to the IRONFISH official website, or you can directly join the Z.WORK mining pool to participate.

The above is the quick walkaround of projects that have achieved zero-knowledge proof with zk mining support brought by Minernav. The above two projects are still in a relatively early stage, and the market price is still unknown. Therefore, if you decide to participate in the relevant investment, please carefully and rationally evaluate the value of the project. The real prospects still need to continue to observe the progress of the project and the trend of the market.

Green Bitcoin Mining Crashes, taking Australian Billionaire with It
5days ago 25
Bitcoin Miners are Selling at The Fastest Pace in Seven Years, Mining Stocks Plunge
1weeks ago 22
Hive Blockchain revenue was down 44% despite the surge in overall mining production
2weeks ago 26
4 Tips before Dive into Aleo Mining Testnet 3
2weeks ago 113
FTX Reorganizes, New CEO Seeks Support from Employees During Company Conference Call
2weeks ago 33