It has been nearly a month since the merge of Ethereum, but most of the mineable cryptocurrency coin in the market still fail to bring considerable profits to crypto miners. Especially for GPU miners, and the best case for most civilian electricity prices miners, the situation is a draw based on curreny profit line.

It is difficult to screen out potential coins among many other alt-coins or new coins that can be mined. Although most of the new coins can be mined in large quantities at the beginning, there is a risk that they will never be listed on exchanges. Therefore, Minernav is also doing multi-dimensional analysis to lock in the next current sustainable and potential coin out there in the market.

After reviewing the characteristics and market value of multiple projects, except for the potential ZK mining coins IRONFISH and ALEO that will be launched in the future mentioned in the previous post. At the current timeframe, among the coins that can be mined on the mainnet now, Minernav believes that ERGO may lead the future, especially the pure GPU mining market. There are several reasons for the multi-dimensional analysis and the comparison for this project. 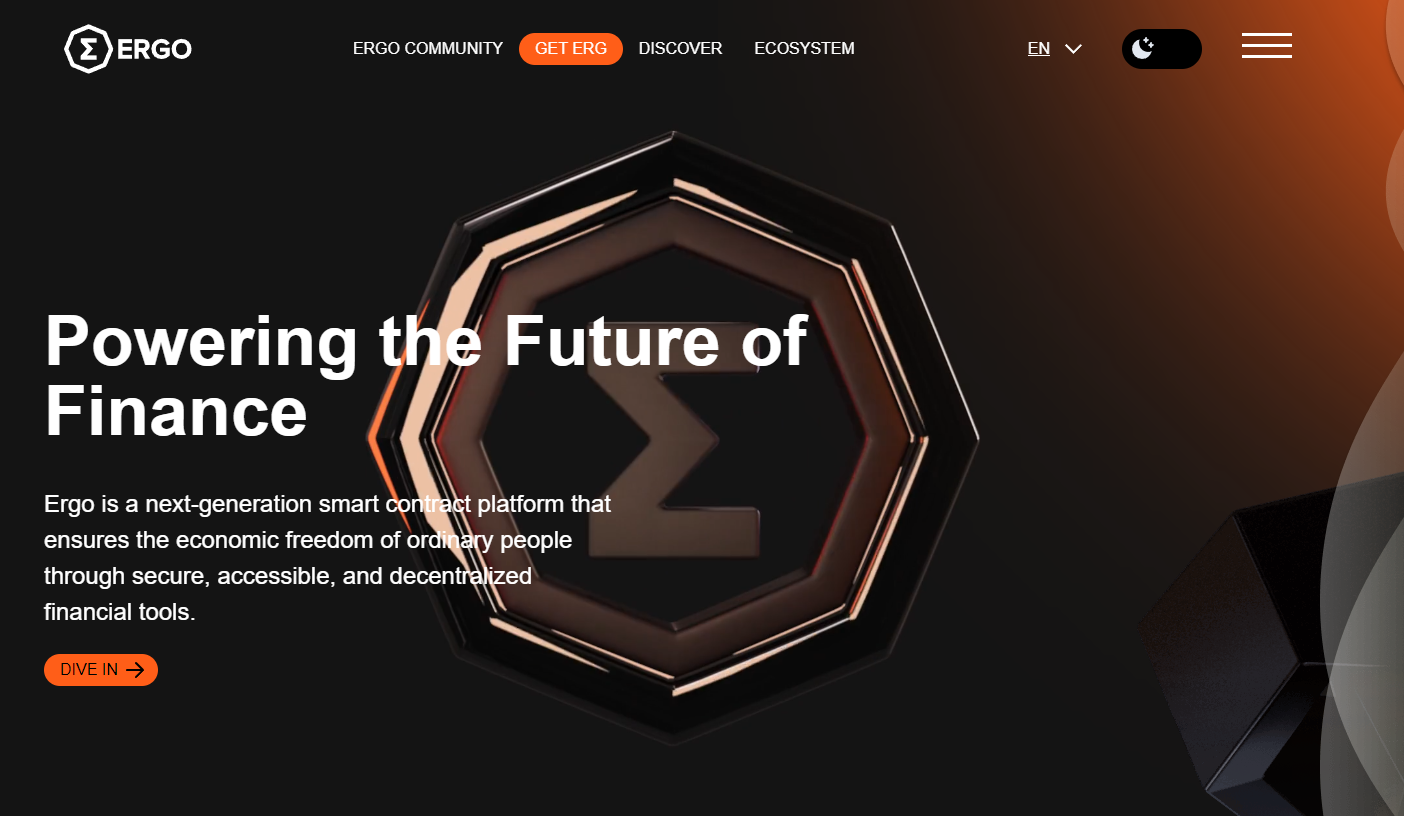 The full name of ERGO is Ergoplatform, which is a new secure, open, permissionless, decentralized underlying financial contract platform based on the concept of Bitcoin PoW. It has almost all the functions of Ethereum. The scope of functions involved in the current project includes custom token crowdfunding, oracles, decentralized exchanges, stable coins, NFTs, etc., as well as optional transaction anonymity, ring signatures and other advanced features .

The original ErgoScript scripting language provides a strong guarantee for the creation of rich dapps on the Ergo platform, and its rich payment settings, such as token spending time and group functions, provide convenient and efficient scenario support for the realization of complex financial contracts. Its co-founder and CTO is blockchain veteran Alexander Chepurnoy, who is also the core developer of Ergo.

1. ERGO Mining with Fair Distribution, NO Pre-mining at All

In 2019, when the project was launched, ERGO is one of the few projects that maintains zero pre-mining, zero ICO, and has not been pre-sold to any investment group, which is a true fair distribution.

The total coin supply of the entire network is 97,739,924, which will not be destroyed or issued later. For the needs of the community's later operation, the project party only reserves 4.43% for the ecosystem, and these tokens are gradually generated through the block generation on the chain. The ERG extracted from the block reward is the ERGO foundation token, which is built in managed in a smart contract in the protocol.

In the first two years after mining starts, 10% of each block reward, that is, 7.5 ERGs will be allocated to the Treasury. The remaining 95.57% is distributed entirely through mining as a public distribution. At the same time, for the long-term survival of PoW, ERGO has preset the incentive model of Storage Fee/Rent, which can ensure that miners who run ERGO mining will still benefit even after all tokens are distributed. And this is very important for the long term miners.

The ERGO project team has carried out research in the field of blockchain for more than 10 years, and through continuous in-depth exploration of this field, a series of improvements and derivative technologies for Bitcoin projects have been accumulated and used in their ERGO projects, including Cryptography, consensus model and the realization basis of digital currency, and these academics have been verified and tested in the industry for a long time.

3. An Improved eUTXO Model Based on Bitcoin

The eUTXO model adopted by ERGO further expands its extended functions based on the advantages of the Bitcoin UTXO model, so that ERGO can support many functions that cannot be realized on Bitcoin. It includes more expressive verification scripts. With the invariant script of the state machine executing transactions, eUTXO combines the language simplicity advantages of the Bitcoin UTXO model with the smart contract expressiveness advantages of the Ethereum account model. This makes it very convenient to build a decentralized exchange on the ERGO platform. 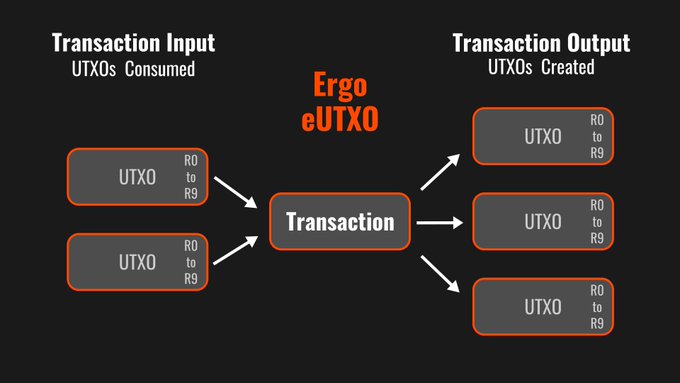 ERGO's consensus protocol, Autolykos, highly inherits the ultimate decentralization spirit of Bitcoin, and at the same time tries its best to save energy consumption while ensuring the ability to support ASIC resistance. The power consumption of ERGO mining is almost the least among its peers.

Autolykos also uses memory-difficult ergo mining algorithms to fight ASICs, so GPUs over 2G can join the network without access to maintain the security of the entire network. 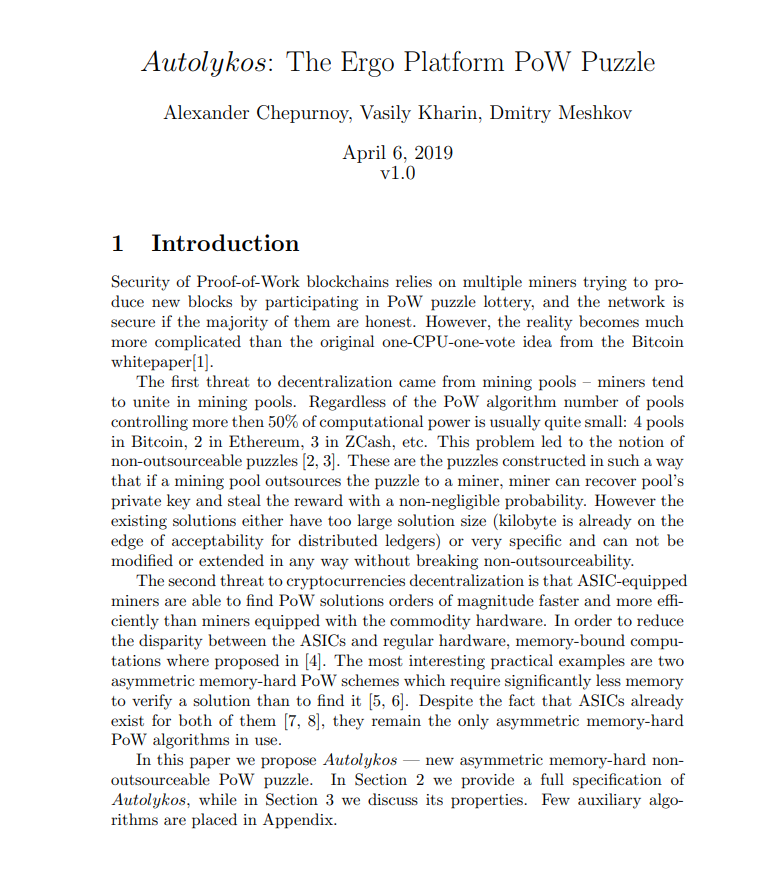 As the smart contract basis of ERGO, the Sigma protocol provides a guarantee for the realization of complex zero-knowledge proof protocol tasks without trusting a third party, while reducing operating costs and risks.

NiPoPoW refers to non-interactive proof-of-work. Its purpose is to use a program to check compressed block information to confirm that an event occurred on a proof-of-work-based blockchain. It does not need to be connected to the whole block data. The block network, also without downloading all block headers, can conduct and verify transactions with complete confidence, saving a lot of the storage space, bandwidth and time required by blockchains. Even work with device with only 1 MB of data, which means built on any device.

After several years of operation and cooperation with some well-known projects, ERGO now has a huge developer and user community, and their Sigmaverse lists many very good and high-quality Dapps. Check it out,If you are interested. 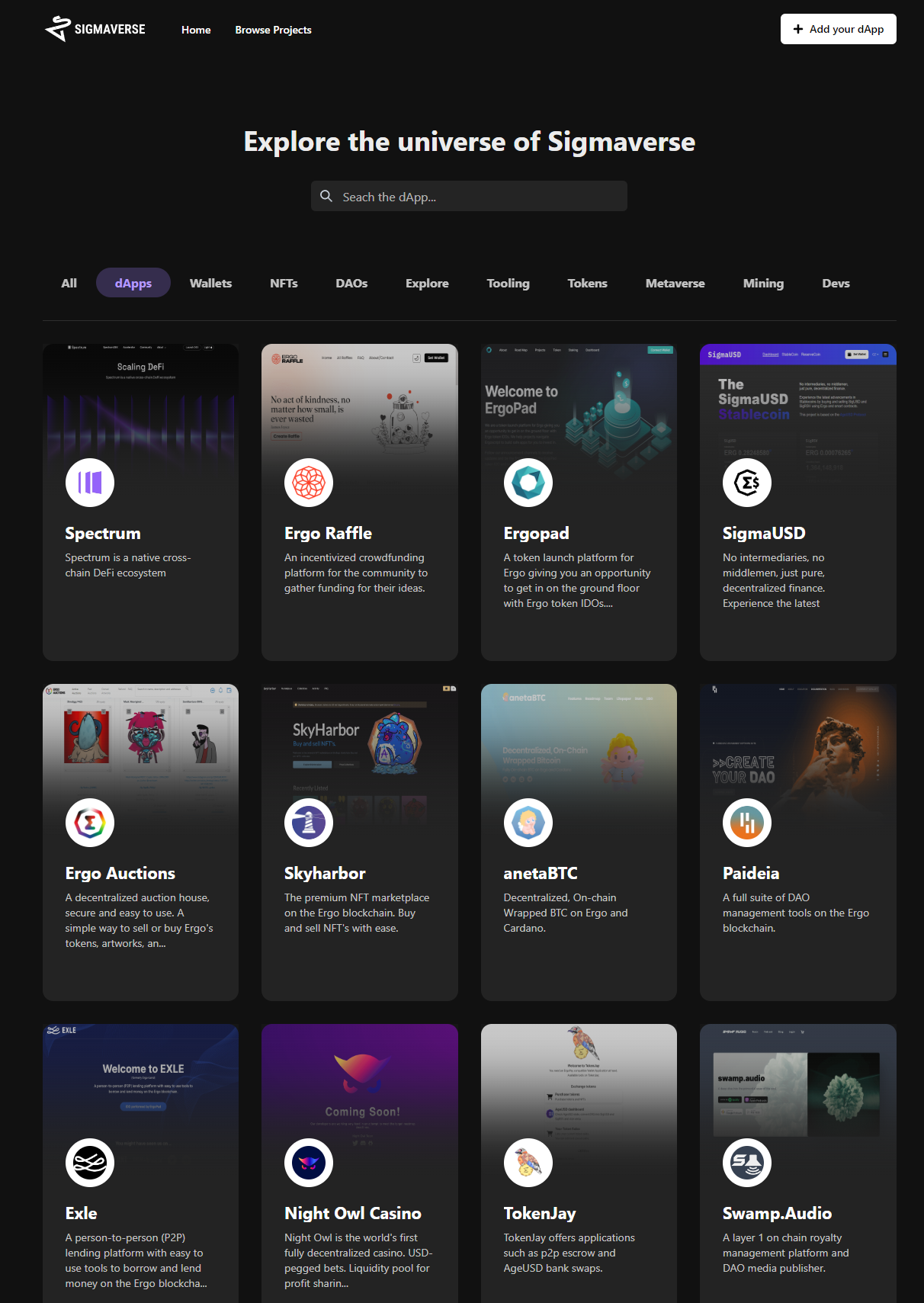 Documentation is an important way for the community to continuously understand and understand the project, and it also provides guidance and project development records for developers and project teams. ERGO has perfect document management and detailed project content characteristic explanation and education. It is very helpful for both novice and experienced project developers. 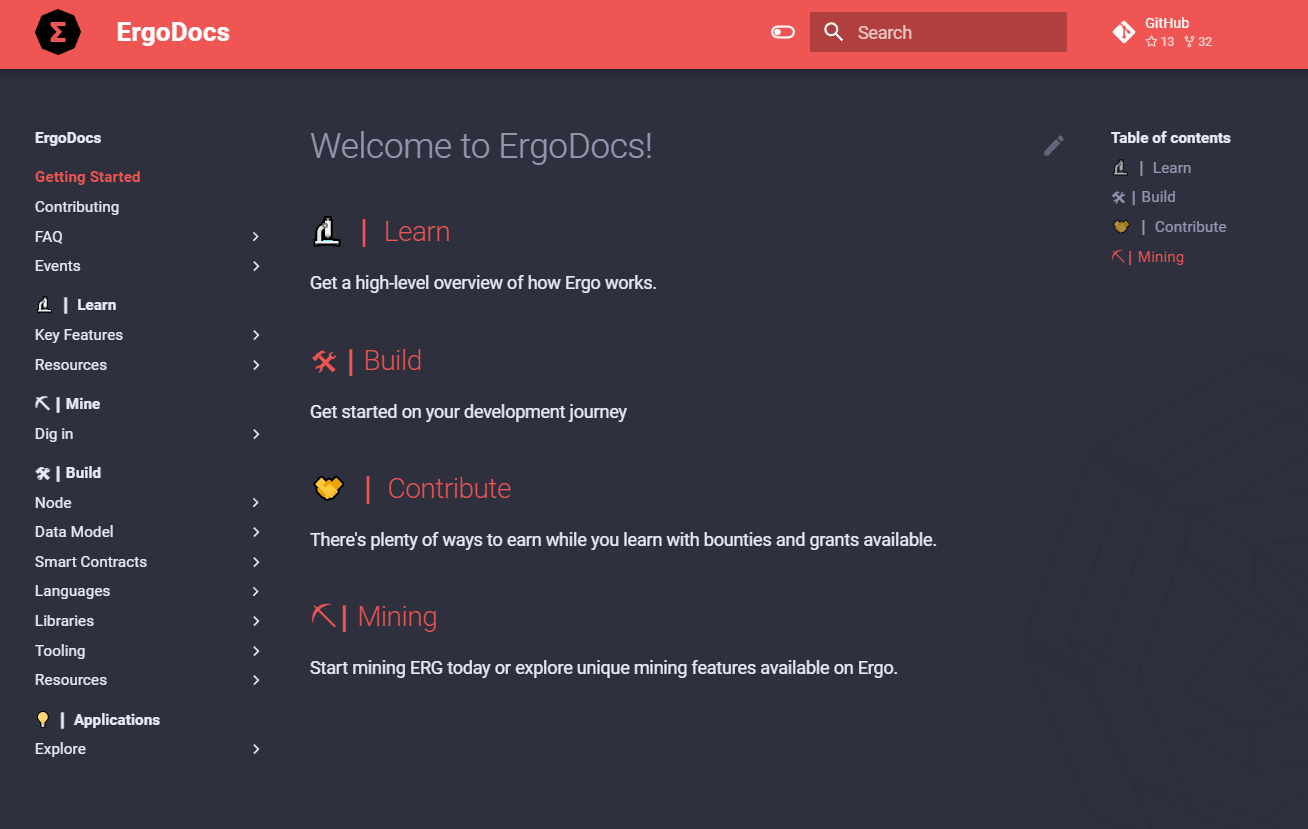 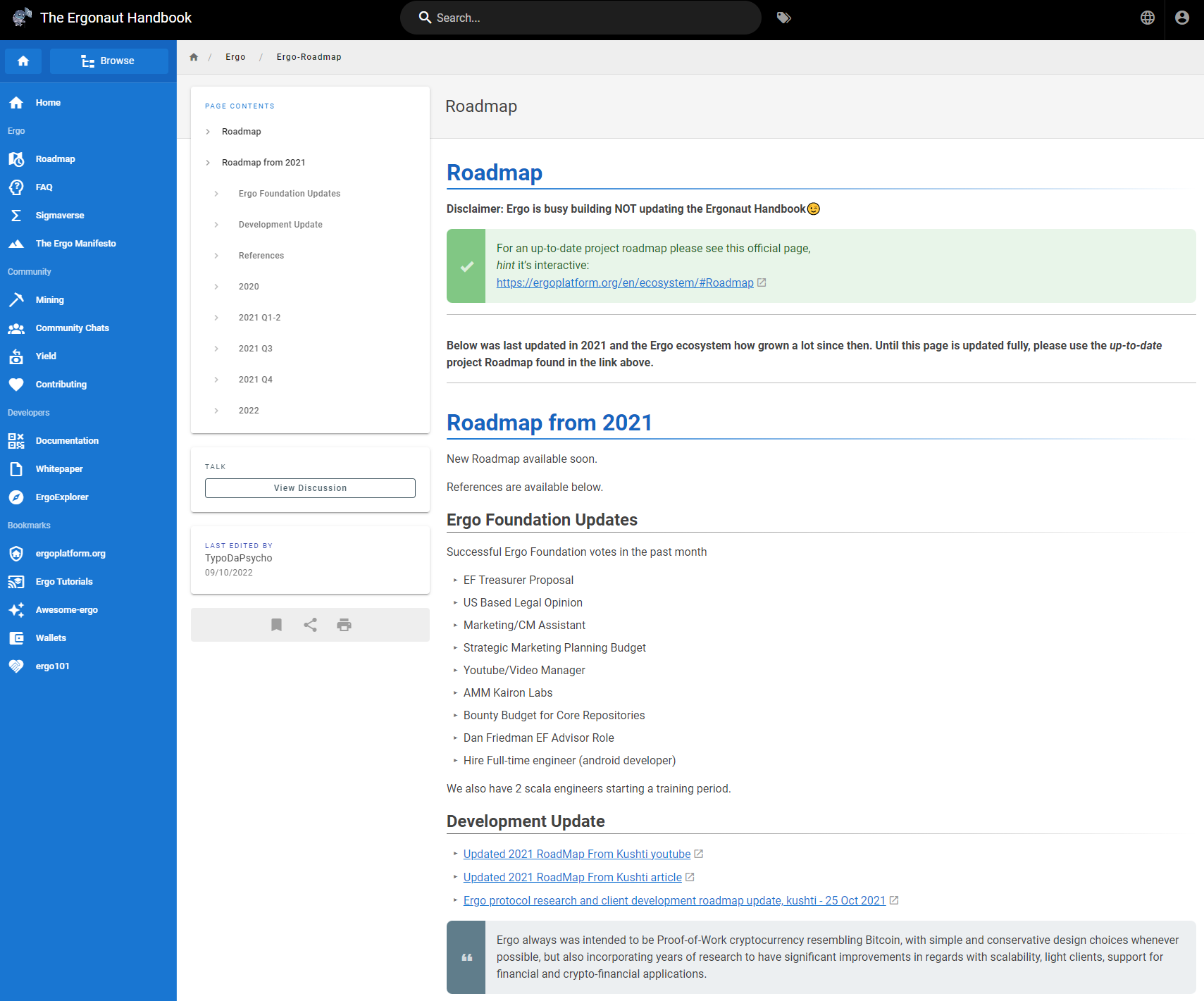 The cryptocurrency domain has always been a relatively high-risk industry. Mining is the most asset-heavy branch in this field, but because of its asset-heavy nature, its ability to resist risks in extreme situations is relatively higher than that of the pure crypto trading market since the hardware device serves as its most basic guarantee.

However, during an up-trend market, it is difficult for people to lose money in the bull run, and may temporarily ignore the risks they take when investing. However, at any stage, the evaluation of projects always requires rational thinking and lasting patience, and never blindly chasing the hot spots project which may bring risks. Along the way, the ERGO project has always adhered to the firm belief in PoW mining, and the community and ecology have risen steadily, allowing us to see the potential hope of GPU ERGO mining in the future.

MinerNav
321
HIVE Posts Revenues of $44.2 Million in the Latest Quarter

MinerNav
1.4K
3 reasons why Bitcoin’s drop to $21K and the marketwide sell-off could be worse than you think

Bitcoin Mining: Proof of Work - The Reason Behind "Guessing" Numbers
3months ago 0
Transparency Is Coming to Bitcoin Mining as Institutions Eyeball ESG
3months ago 0
Largest Ethereum miner, Ethermine, stops processing sanctioned transactions
3months ago 1
3 reasons why Bitcoin’s drop to $21K and the marketwide sell-off could be worse than you think
3months ago 0
HIVE Posts Revenues of $44.2 Million in the Latest Quarter
3months ago 2

Green Bitcoin Mining Crashes, taking Australian Billionaire with It
5days ago 25
Bitcoin Miners are Selling at The Fastest Pace in Seven Years, Mining Stocks Plunge
1weeks ago 22
Hive Blockchain revenue was down 44% despite the surge in overall mining production
2weeks ago 26
4 Tips before Dive into Aleo Mining Testnet 3
2weeks ago 114
FTX Reorganizes, New CEO Seeks Support from Employees During Company Conference Call
2weeks ago 33