Mining could be treated as a pre-process of adding and verifying transaction records on the distributed ledger of the public blockchain (taking Bitcoin as an example). Due to the large number of participating nodes on the network, a competition mechanism has been introduced to fight for this ledger accounting right. It is very difficult to obtain this right in the current super-large scale blockchain network like Bitcoin, and it takes a lot of money and computing power, this process is called "mining". The block reward obtained after completing the ledger accounting right and transaction packaging correctly is the on-chain protocol currency: Bitcoin, this process is also called minting. Repeating this operation continuously ensures the smooth flow of network transactions. At the same time, this whole process is completed without any controlled third party. Due to the existence of huge computing power, the Bitcoin network has a very strong network attack resistance.

Now, most people already know that the actual computing task of a miner is to continuously guess the specific number (random number) which is required in the next block so that the premise of the goal (target amount leading 0 number) can be achieved after using this number to participate in the block hash operation. However, some people have also questioned that Bitcoin mining consumes so much power and energy, why can’t the computing tasks be done with more meaningful things? That is, abandon the seemingly foolish task of guessing numbers and replace it with tasks that can provide services to humans, such as running AI deep learning training tasks. This seems to be in line with the laws of human development, but why doesn't it work?

First, we can assume that if the bitcoin proof of work is changed to a bookkeeper to solve a meaningful problem, the premise is who will keep coming up with the questions, and under the target difficulty, how can the difficulty of each question be consistent, how to judge whether the standard is unique or not? These things need to be potentially quantified and determined, and these tasks are all purposeful and instructive which are not suitable choices for proof-of-work. Because any problem with a specific purpose has a direction that can be optimized, which leads to the non-linear controllability of the development of the difficulty index. In other words, if there is a high-speed solution to this problem one day, it will be very easy and destroy. The predictive stability of proof of work, so the premise of the task of proof of work must not be purposeful. This explains why the design of the blockchain uses the analogy of "guessing the number", or coin tossing, because this simple task of tossing a coin can no longer be optimized. There are only 0 or 1 result. If the computer can flip a coin, it also works, but for the convenience of the later stage, the code is used to replace this process. So in a brief, the task of "guessing the numbers" is mainly for balance and fairness.

Bitcoin mining has come a long way since Satoshi Nakamoto launched the Bitcoin network in 2009. Since then, the crypto mining industry has slowly developed into a global industry worth more than billions of dollars. Operators and enterprises from all over the world have begun to invest resources on a large scale to compete for infrastructure in crypto mining that may provide the foundation for the future digital world. As a reward, their participation also provides more critical computing power support and security for the global Bitcoin network. As can be seen from the figure below from CBECI, as of January 2022, nearly 80% of the regions and countries in the world have joined the BTC mining industry. 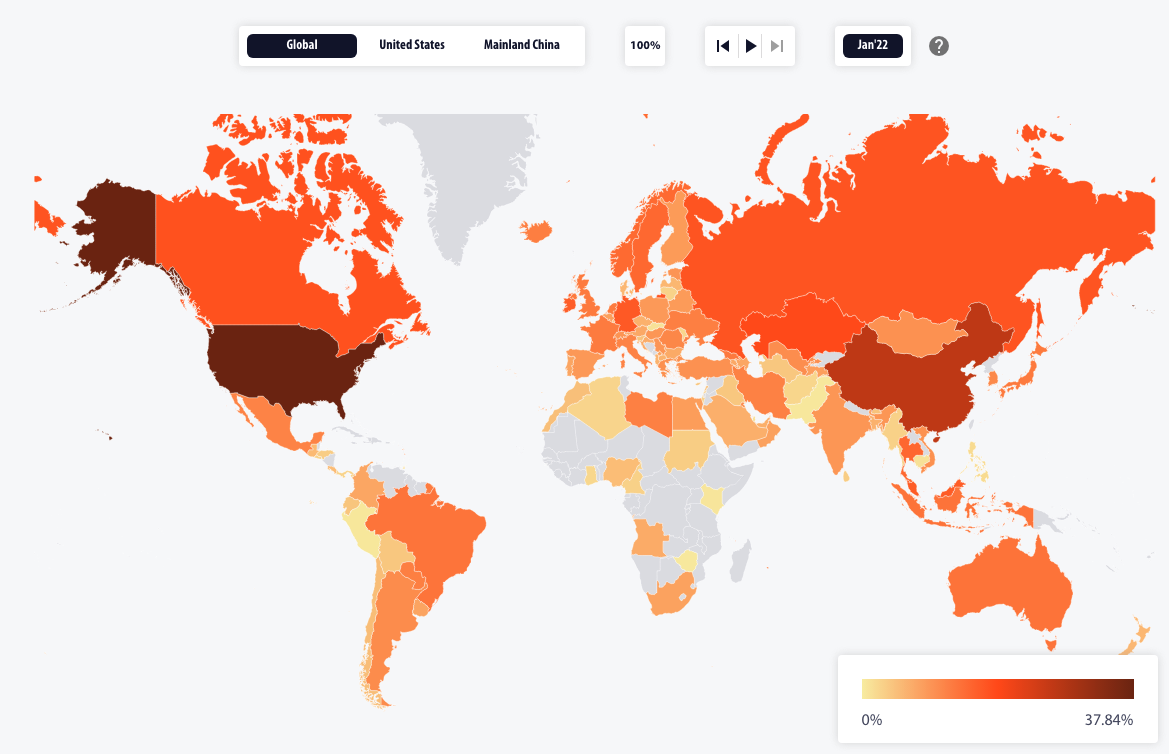 Many people worry about whether the global energy consumption caused by Bitcoin mining will increase indefinitely. Evaluating this result needs to be analyzed from multiple dimensions. First, Minernav thinks that the growth of global pure electricity consumption is controlled by how many machines are put into the network, and secondly, the energy consumption of the miner determines the total power consumption. In general, the main purpose of mining is to bring revenue, so it has brought about the replacement of low-efficiency miners. With the continuous innovation of mining technology chip technology, the energy consumption of new mining models will be lower but bring higher unit computing power and higher procurement costs. We can see from the CBECI's bitcoin power consumption model diagram that since the birth of the first bitcoin miner in 2013, the energy consumption per unit of computing power has been reduced by nearly 40 times, so it will continue to develop in the future. Therefore, considering the above factors, most of the mining operations will be aimed at generating revenue while strengthening network security. Coupled with external national policies, electricity prices, and market conditions, the total power consumption of bitcoin in the world should be one upward process of volatility will eventually reach its own internal equilibrium and will not grow permanently and without any limit. Of course, this is also closely related to the attitudes of governments around the world on this issue. 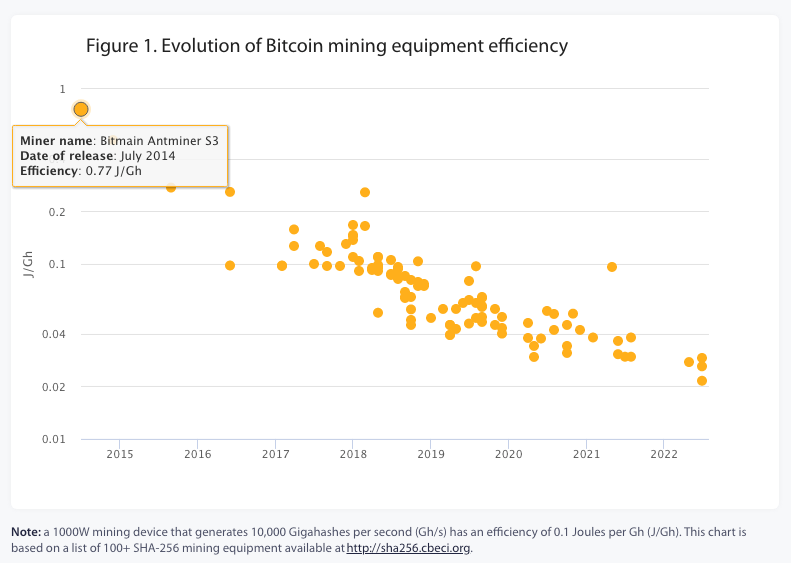 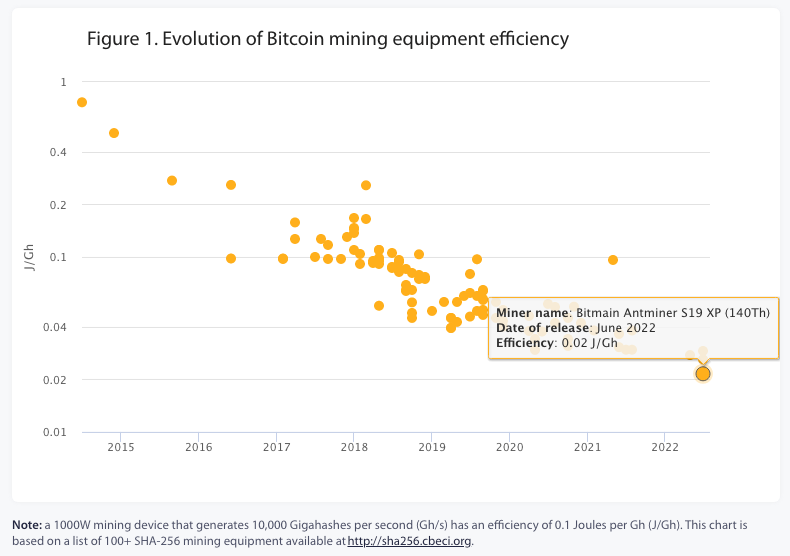 Although now we can't say fortunately the full scene of the future use of Bitcoin, because we are still expanding perspectives step by step on the way to observe it more closely. In the future, Bitcoin may play its value in larger scenarios.

Perhaps Bitcoin is the only way to go through the trial stage of human digital civilization, and in the digital world, especially in the full peer-to-peer network, the surrounding between all devices is dark, and no device is trusted, which brings the need for consensus the place where the system comes to be unified. Well, this consensus process is proof of work, which is also called mining.

Oil and Gas Giant Shell is Moving into Bitcoin Mining

Bitcoin Miners are Selling at The Fastest Pace in Seven Years, Mining Stocks Plunge
1weeks ago 0
Oil and Gas Giant Shell is Moving into Bitcoin Mining
2weeks ago 0
8 Reasons Why it's Worth Keeping Mining ERGO after the Ethereum Merge - Briefing
2months ago 2
Transparency Is Coming to Bitcoin Mining as Institutions Eyeball ESG
3months ago 0
3 reasons why Bitcoin’s drop to $21K and the marketwide sell-off could be worse than you think
3months ago 0

Green Bitcoin Mining Crashes, taking Australian Billionaire with It
5days ago 25
Bitcoin Miners are Selling at The Fastest Pace in Seven Years, Mining Stocks Plunge
1weeks ago 22
Hive Blockchain revenue was down 44% despite the surge in overall mining production
2weeks ago 26
4 Tips before Dive into Aleo Mining Testnet 3
2weeks ago 117
FTX Reorganizes, New CEO Seeks Support from Employees During Company Conference Call
2weeks ago 33